Alright, so, finally, we have the second culture shock's Final Boss. 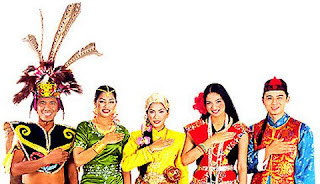 Now, if you look in Wikipedia, it describes multiracial as "people whose ancestries come from different races". However, in Malaysia, the word 'multiracial' has a different meaning altogether. (Of course, we also have people whose ancestries come from different races. We call them mixed.) For Malaysia, when we say multiracial country, we refer to at least 100 ethnic and sub-ethnic groups which make up the country. Especially in my hometown Sarawak, there are about 40 sub-ethnic groups, mainly the Iban community which make up 30% of the population, not mentioning the various sub-communities/ethnics of the Chinese population.

For a Japanese, this is something absolutely unimaginable. Although there have been an increase in the number of immigrants, creating cities like Oota in Gunma where there are big communities of Brazilians, Koreans... However, most of them cluster in their own groups and do not mix with the Japanese.

Now, this was so in Malaysia too. However, now, the situation has changed so much. Of course, we have our share of conflicts, misunderstandings and prejudices. But at least we are more willing to communicate and share our differences and more free to express our individual thoughts than ever.

In Sarawak, there are more Muslim women who do not cover their heads in public than in Semenanjung. This included one of my friends. When my Japanese friends met with her, they didn't know she was Malay. Until I told them of course.. And they were like "oh, really? hmmm" with a big frown on their face. I think they were thinking, 'well, everybody is malaysian.. what about malay, or chinese?' In a Japanese' mindset, nationality is race. But for a Malaysian, nationality and race are totally different things.

Oh, one more thing. Malay = Muslim. I also forgot to explain this fact to them, which is something everyone knows and doesn't need to be explained in Malaysia. I only found out I forgot to explain it to them (because it's so normal to me I didn't even notice they didn't know) after talking to a Japanese cameraman in Sarawak.

What's worse, in their minds, they had an image that Muslims equal terrorists. Yes, we have our share of Jemaah Islamiah troubles and Muslim cults, but Malaysian Muslims, and many other country's Muslims, including Malaysian Muslims, American Muslims are moderate and irradical.

I think this is one cultural difference that a Japanese will have the hardest time understanding about Malaysia. This is also one of the things I love most about Malaysia. I believe this diversity has changed and made our food culture, language, and mindset so much more different and special than any other nation in the world.

Sorry.. One paragraph gone somewhere.. ^^;
Now, 2nd Japan-Malaysia Culture Shock : Ignorance. Now, I'm not generalising. Not all Japanese are ignorant. In fact, Japanese people are one of the most literate and learned people in the world, and read the most books and newspapers on average. So what do I mean by ignorance? 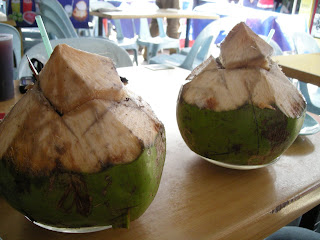 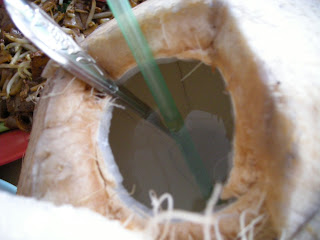 Wah, this is the first time i see Coconut Milk!
Malaysian: What? Coconut Milk?? HAR? What did you say?
Japanese: Coconut Milk lar.. You donno meh?? the one you put in dessert and it become very sweet 1 lor!
Malaysian: HAR? I know lar Coconut Milk. Where? I don't see any.
Japanese: Neh, Inside lar! You blind arH?
Malaysian: Walau. That is Coconut Juice lar. Adui! 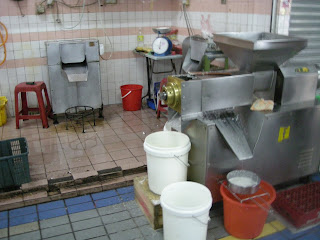 This is how you make Coconut Milk (Santan) 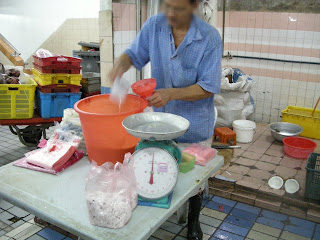 And that's what Coconut Milk (Santan) looks like
Japanese: Walau.. You don't cheat me lar.. Coconut Milk come out from Coconut 1 ler.. and is Liquid 1. I know 1. Don't play play! ^^ 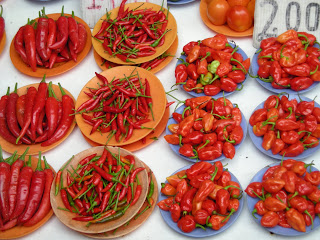 Chilli
辛い.."Karai" What does this word mean? In my dictionary, it's translated as 'hot', 'spicy', 'peppery'.. But what does it really mean to a Japanese? Well, i imagine if you asked them, they would say 'curry?' or 'wasabi?'.. But for us, Hot and Spicy means so much more. Why do I prefer Malaysian food over Japanese food? One word : Spice. Give me one example of a Japanese food cooked with more than 5 spices and I'll admit defeat. But it's a fact : Japanese people just don't cook Spicy food.

Yes, I'm stealing Super Blogger's Post Title.. So wat?? XD
well, unfortunately, the Japanese students in my college aren't as rich as Nagaoka College of Technology's students XD so only two of my friends followed me back to Malaysia for the summer holidays.
And I hope more would follow... with their Baito-dai lolz.. but the next time I'm not offering free accomodation ^^

Let's start with a little dessert.. 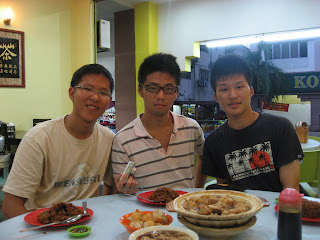 That's us posing behind a feast of Bak Kut Teh if u don't notice =)
"Dessert?" u must be wondering.. well, u must first understand that there are NO, i repeat NO kopitiams or mamaks in Japan. If you ever got home-sick over something like that, u'll have to get by with Yoshinoya and Ramen-Ya's.

Culture Shock No.1 Food Culture
What is Japanese food? Ramen, Chinese noodles in miso soup, salted soup, soya sauce soup. well, in short, Chinese noodles in MSG soup XD wat else? tempura, fried.. err.. everything? try deep frying a capsicum soaked in flour.. that's tempura.. no, i'm not joking. ^^ sushi, i have nothing against sushi, thank you. i dont mind 3 meals all sushi.. no, i dont even mind the wasabi. hmm let's move to the south islands of japan.. takoyaki, baby octopuses inside this ball of flour.. yes, this is special, i admit.. and wat else? teppanyaki.. to be honest, i've never even seen that in Kantou.. and i really admire ppl who can still eat it after observing the amount of oil poured on the teppan and the vegetable being molested by all that oil on the teppan.. yes, it's that gross. then we have the monja-yaki and okonomiyaki.. oiiiiiiiii wat the heck is with all that yaki yaki?? FYI, yaki means fry in japanese.. u call that HEALTHY japanese food?? ^^; hmm i forgot.. there's also Japanese curry, first came in as English(UK) curry, which is sweet and fruity.. uhuh.. now i know why they have such weird tastebuds for curry ^^

Let me tell you a secret about why Japanese are so 'healthy' and slim compared to foreigners. It's not because their food is healthier, as the international Japanese food business claims, but because they eat one of the smallest portions of food compared to most countries..
Now, let's compare Malaysia and Japan.. Before I mention meal portions, first of all is the 'amount of meals', which I have added as a poll on my blog. In Malaysia, a lot of ppl have breakfast, coffee break, lunch, tea break, dinner, and supper. that's a total of 6 meals a day.. While in Japan, they dont even have a proper translation for supper or tea break, altho there is coffee break (a gairaigo however, which means foreign assimilated words).

Here's a little Malaysian supper.. This is a Roti Tisu.. no, i'm not kidding.. it's just too big to shape into a cone tower.. For those who do not know what a Roti Tisu is, let me give you a hint.. it's an indian dish.. but it's not available in India XD Please visit Malaysia for more info! lol

Now there are so many other differences in the food culture of Malaysia and Japan. Another of these examples is PIZZA. In Japan, the pizza crust is around 0.2 cms thick.. in Malaysia it's at least 1 cm thick. 1.5 to 2 cms for stuff-crusted, not to mention. 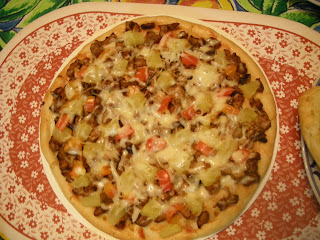 My Mum's Handmade Pizza (The Crust is bought at the Supermarket) =)

For those of you Malaysians who actually like Japanese Pizza or Japanese Italian food, just let me say this : What kind of pizza has more topping than flour?!?!? and more oil than pasta ^^;

One more thing I really can't accept about Japanese food is this: 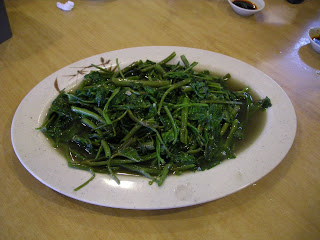 This is Kangkung Fried Chinese Style.. now, if anyone, ANYONE has ever seen a japanese dish like this, please tell me. We eat this much vegetable at least every day (unless you don't eat at home) compared to Japanese, who maybe have a small bowl of cabbage salad (i love it actually) everyday, and some tsukemono (pickled vegetables) a day.. so tell me, which is healthier?

okay, I'll leave this much for you guys to think about for today.. Well, after the trip back to Malaysia with my friends, I've realized a lot of differences in Japanese and Malaysian cultures that I've not taken the time to notice before.. and I've also realized I'm MADE IN MALAYSIA XD

Darn I can't find the picture I wanted to upload on my new post.. sheesh the post is going to have to wait for tomorrow.. after i get the pics from my friend. but not many ppl will read my blog anyways.. haha.. just want to write it for no reason anyways ^^

oh ya, i would like to announce a very very very HAPPY news for the alumni of St Thom Form 5sc1 class of 2004
If you have not read this post , please do!
Congratulations to our dear ex-classmate, Gabriel for his relationship, and now a renewed single life! For more info, please contact him on your own. And Gab, an early thank you for the future treat XD 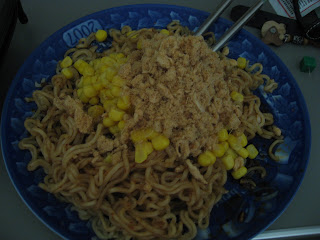 Sorry for the longgggggggg blog holiday.. hehe.. to be honest, it's just not that fun blogging anymore.. maybe coz i dont get comments >.< Well, anyways, here's the appetizer for today! haha.. might update more later tonight.. anyways, let's see how good u are at guessing my recipe/diet XD the ingredients are at the bottom! ^^

Quotes of the day

lonehunter88
Just a simple guy studying in Japan.. learning to be an adult and trying to let go of bad habits

What do i have to do

i have been there for you

watched over and protected you

From the time you first saw light

i gave you me and my inspiration

before even your mother knew i did

i crafted you with mine own hand

Look around you see my glory

The trees praise me

The beams Glory to the King

all this i have crafted by my hand

yet i am constantly being asked

"prove to me you are there"

what left do i have to prove

what else do i have to do

to make you aware that i am here